Guest blog: Inspired by history - my visit to Northumberland Archives 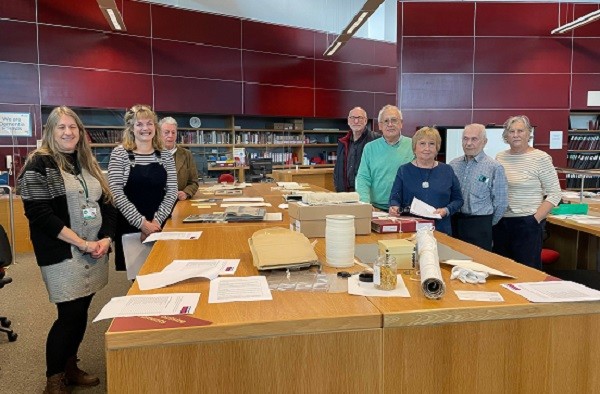 A recent trip to the Northumberland Archives inspired the following guest blog written by a volunteer from our Village Halls Heritage project. Alison Cowen from the Jubilee Hall in Newton by the Moor got to visit behind the scenes as part of a training session organised by CAN to learn how to research the history of village halls

Over to you Alison!

I love history, so the chance to visit the Northumberland Archives, at Woodhorn, as part of the Village Halls Heritage Project Training was right up my street.

As I stood outside the gates with several other members of the project I felt a shiver of excitement, or was it just the cold?

Once inside we were given a very warm welcome by head of the archives, Sue Wood. She explained Northumberland archives are split over two sites with the one at Berwick upon Tweed covering the area from Berwick in the north of the county as far south as Ellingham and takes in the villages of the Cheviots. If you are covered by the old Berwick upon Tweed Borough Council, then that’s where your records are held. Woodhorn covers the remaining county of Northumberland.

The archives collect a huge range of documents and photographs, sometimes given as a gift for example by a family or as a deposit by a particular body such as a social club. They receive these from both official and private sources with the aim of preserving them for future generations and to make them available as a resource for people, such as ourselves, researching a particular topic or investigating their family tree.

We were then able to go ‘back of house’. This took us behind the scenes to the vast secure strong rooms. These are sealed rooms that have their temperature and moisture levels carefully controlled to keep the documents in as good a condition as possible. All the shelves were full of boxes, electronic and moved at the touch of a button. I couldn’t help thinking it would make a great setting for a murder scene, archivist squashed by shelving!  (this can’t happen as there are safety features built-in).

Each set of shelves had a number and each box on the shelf a number. Finding something must be like a giant game of Battleships.   Another interesting room was where, subject to copyright, documents, maps, photographs etc, can be copied for a small fee. Apparently TV production companies often use this facility for period detail such as posters.

Back in the public search room, we learned how to use the catalogues and indexes which were all linked to the numbers on the shelves and boxes in the strong rooms. If you want to visit the archives you can book a session using the online form via their website. You explain the topic you’re exploring and a researcher will have several documents from the strong rooms waiting for you. It seems quite straightforward.

Sue had put on a display of images and other documents relating to village halls that were currently stored at Woodhorn. I was delighted that several related to my own Jubilee Hall in Newton on the Moor. We were shown how to use various online resources including Northumberland Communities and the British Newspaper Archives. The latter is a subscription service, however if you have a Northumberland Libraries card you can visit this site free of charge at any county library. My own village hall was used as an example as to what could be found and I was amazed to find that the hall had been used as the venue for a music event attended by some quite influential people at the time in the late 1800’s.  Fascinating.

If you’ve got any records, pictures etc in your own village hall it may be worth depositing them at Woodhorn. It’s very easy and you still ‘own’ them and the copyright of them, so that if you don’t want them available to the public in a particular time frame because someone is still alive and may be upset by this if it was made public, you can say so. There is an uncomplicated form to complete and the staff are both helpful and knowledgeable.

We were encouraged to think about the environment we store our village hall documents in.  When you deposit them at Woodhorn they go to great lengths to clean dust and mould from everything storing them in acid-proof boxes with brass fastenings. Julia (Plinston) is going to look at potentially buying suitable products in bulk so that each hall can purchase smaller quantities from her. Apparently one of the worst sets of documents to clean came from the old Dickson, Archer and Thorp solicitors in Alnwick. The property was almost Dickensian and some of the documents were covered in pigeon poo!

I personally could have stayed all day and can’t wait to get started researching my own village hall in the New Year.